Acupuncture and the Opioid Crisis 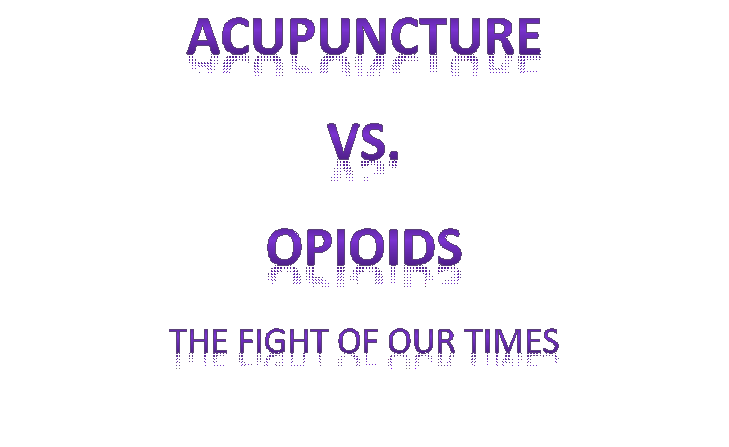 The Opioid Crisis is making headlines these days.  National leaders are beginning to pay attention to this ongoing and expanding situation of overuse of opioids, a class of substances  which include heroin as well as prescription pain killers such as Oxycodone, codeine, morphine, or Fentanyl.  Essentially the opioids interact with nerve and brain function. These medications are very strong and have a powerful effect on the entire body, brain and mind.

The latest data from the Centers for Disease Control:  From 1999 to 2017, almost 218,000 people died in the United States from overdoses related to prescription opioids.  Overdose deaths involving prescription opioids were five times higher in 2017 than in 1999.

In my opinion these statistics are intolerable. We talked about the twenty thousand deaths by overdose (in 2015 alone) but there is no record of the hundreds of thousands of lives that have been irreparably damaged due to opiates, including families and neighbors. The cost in lives and pain is staggering.

HOW DOES ACUPUNCTURE STACK UP?

It turns out that Acupuncture is much more effective and FASTER than morphine!

In July of 2016, a large study was published in the Journal of Emergency Medicine.  Researchers randomly selected 300 emergency departments and split them into two even groups. The first group was subjected to acupuncture in order to treat their acute pain.  The second group was given morphine.

“The results were even better than researchers imagined. Patients who were treated with acupuncture experienced a whopping 92 percent reduction in their pain, while the morphine group experienced a 78 percent reduction. Not only that, the acupuncture group had a much faster pain recovery time. While the morphine group took an average of 28 minutes to recover from their pain, the acupuncture group recovered from their pain in an average of 16 minutes.”

Acupuncture, used by 25% of the world’s population as a Primary Medicine, is still considered the “alternative treatment” in the U.S.  However, it was both more effective in reducing pain,  and it was faster.  So what’s the catch?  With negligible side effects (when practiced safely by a trained acupuncture physician using clean needles each time) vs. the laundry list of bad side effects from morphine, it seems like a no-brainer!   We need to further educate our relatives, colleagues and neighbors, the general public, our healthcare system, and all governmental levels about the efficacy of acupuncture for pain.

While I believe that there is a place for opiate medications, I also believe that we need to rely on other forms of pain management. Acupuncture can be used for pain management. In my practice I see many patients who either cannot or will not take opiates for their pain management. Some people are sensitive to opiates and have severe reactions to them. Others just do not want to ingest opiates on principle or because they are concerned about the toxic affects these drugs will have on their body. One of these toxic effects is to kill off many of the probiotics in these patients’ guts, disrupting absorption of critical nutrients from their foods and weakening their immune systems.  Still other people can no longer get the prescription drugs they once had.  They are seeking another way to manage pain besides the opiates, and they don’t want to purchase heroin on the street.

HOW & WHEN TO UTILIZE ACUPUNCTURE FOR PAIN

Acupuncture has a long history—over many centuries–of helping people manage pain. Numerous studies show that it is effective, although in Western terms, there is not full agreement on why it is effective.  From the knowledge within the acupuncture practitioners, these are some helpful guidelines as to when to use it:

When you take the opiate pain killers, the opiates do not just go to your pain; they circulate throughout your whole body interacting with nerve function on many levels. That is the reason that so many people get constipation when they have been on pain killers. However, these opiates also have an effect on all your internal organs, body functions and mental processes.

Acupuncture is much less invasive as a treatment for pain, and it is not addictive. I highly recommend using acupuncture instead of–or in concert with–pain medications to help patients use less pain medication and get off of it sooner.

Addiction to opiates can happen to anyone.  It is not a character flaw or a weakness in the person. It is just that the body comes to rely on the medication. If you have been taking opiates and are having trouble getting off them, know that acupuncture can also be use to treat the addiction as well as the pain. I see this most often in my patients who are having trouble because they can no longer get the amount of medication that they were previously prescribed. Western doctors have acknowledged the opioid crisis and have started backing off on the amount of medication they will prescribe, leaving their patient base with less medication to relieve their pain. Acupuncture can be used to help bridge the gap as patients ween themselves off of opiates.

I have one patient with Trigeminal Neuralgia who was on substantial amounts of pain medication, and recently his doctor is allowing him less and less pain medication. Those of you that know about this condition know that it is a terrible, unrelenting stabbing facial pain that never goes away and never gets better. Using a combination of acupuncture and pain medication this patient is able to manage his pain.  Although he is in distress much of the time, he is no longer thinking about ending his life.

Pain is a condition that is as serious as it gets. It is the condition that I see most often in the clinic. It is not something that you can see when you look at a patient. You can only see the effects of it and listen to the details of the patient’s description of their life and how pain affects their life. We should all have some compassion for the plight of those in pain as we deal with and work our way through this ‘Opioid Crisis’.

Freedom & Health to You,

Dr. David Martin
And all the Providers at Lotus Blossom Clinic
www.LotusBlossomClinic.com
239-277-1399

Acupuncture vs.intravenous morphine in the management of acute pain in the ED.

Acupuncture vs. Morphine:  And the Winner is?  Journal of Emergency Medicine  https://www.thealternativedaily.com/acupuncture-versus-morphine/